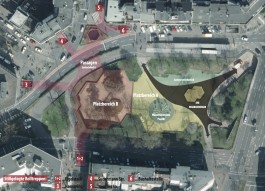 The City of Cologne had an invitation of tenders in 2018 for interactive art installations to reuse the old defunct escalators at Ebertplatz in Cologne. The area, which is also access to the subway station was known to be a little shady due to the dark corners and broken lights and escalators, so many citizens tried to avoid them during nighttimes. The initiative also aimed to make the area more lively and bright.

Our (rejected) Concept "Lichtstiegen" was to add sensory led panels onto the steps of the escalators. The light on the escalator steps is animated to indicate movement while not in use while being reactive to people walking on them. These light panels would replay the movement of the people using it before you to playfully connect citizens and invite people to use the installation beyond transit times.

The Panels are enclosed waterproof units mounted to the stairs by steel screws to prevent corrosion. Piezo elements while being really cheap are very sturdy and act as pressure sensors within the units. Since the units are side chained the installation would work even when a unit has a malfunction. Replacement of units is easy done by one person even during operation.

Even though our concept was rejected our friends and former study colleagues Daniel & Roman from AWWW realized a quite similar concept including sound. Check it out.